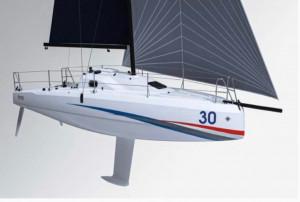 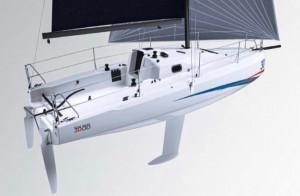 Bound by common values, Jeanneau and Multiplast, two major players in the world of boating, have naturally decided to collaborate and join forces to develop a new high performance and accessible sailboat. Driven by a strong commitment to responsibility, this new one-design will offer an intense sailing experience.

The Sun Fast 30 One Design is the outcome of a project initiated by three prestigious offshore sailing clubs and aims to become a reference One Design Class for offshore sailing, with an ambitious and international racing program.

This design project for a 30-foot one-design offshore racer was imagined by UNCL-Racing Division from the Yacht Club de France, the Royal Ocean Racing Club (UK) and the Storm Trysail Club (US), aimed to encourage the discipline, to make sailing more accessible and to train the new generation. The VPLP Design/Multiplast association won the international call for projects “Class 30: Let’s Build the Future” competition.

The Sun Fast 30 One Design, designed by VPLP Design, benefits after intensive studies from a powerful and versatile modern hull (semi scow), adapted to an offshore purpose. Multiplast brings all its cutting-edge expertise to the conception of this one-design monohull down to the smallest detail to offer a seaworthy, well equipped, and accessible boat thanks to its ease of maintenance and limited budget.

United by common values, Jeanneau and Multiplast are joining forces and respective expertise around this forward-looking project in the world of ocean racing.

Multiplast brings on the one hand, its expertise in the conception and development of offshore racing boats. On the other, takes care of the relations with the clubs responsible of the launch and animation of the Class and race programme as well as the sales supervision to support Jeanneau’s distribution network.

Jeanneau will manufacture the Sun Fast 30 One Design in its boatyard in Cheviré, near Nantes. In addition to its agility and industrial capacity, Jeanneau provides all the services, guarantees and technical support offered by its organization and its global distribution network.

A PERFORMING AND ECO-RESPONSIBLE BOAT

Beyond performance, respect for biodiversity and aquatic environments is at the heart of the actions of the two brands.

This explains the particular attention that has been given to innovation and eco-design, in accordance with the initial specifications of the competition, with a global consideration for the construction phase, the boat’s usage and way of sailing.

The revolution of this project relates to the use of Elium® resin, a thermoplastic resin by Arkema. This resin has the particularity of being made of 20% recycled material but also of being recyclable.

Therefore, it plays a role during the whole life cycle of the boat. First, it makes production waste recyclable. It also allows the deconstruction and recycling of all composite parts thanks to the separation of the fibres and the matrix.

This resin has the same mechanical properties as a traditional resin. It allows construction at similar weight and maintains the performance and reliability of this new model. The Sun Fast 30 One Design will be the first series-production recyclable sailboat.

This development is the result of more than 3 years of R&D within Bénéteau Group to develop with Arkema a grade of Elium® resin suitable for boating. In addition, two engines are offered, a traditional thermal engine and an electric one with the same weight, without consequence for the one-design.

Carboman Group, which Multiplast is part of, is today a leading European player in the world of composite materials, capable of offering a very wide range of products and solutions. One of its subsidiaries, Ouest Composites Industries in Auray, is currently producing the preforms
and moulds for the boat.

How not to mention Multiplast’s significant contribution to the fleet engaged in the Route du Rhum. Indeed, more than 10% of the boats in this edition were entirely built at the Vannes boatyard with no less than fourteen boats to their credit, including 4 Ultimes, out of the 138 boats at the start line. Multiplast can be proud of having won three times in a row in the Ultime category: Groupama 3 in 2010, Banque Populaire VII in 2014 and Idec Sport in 2018.

Being a leading manufacturer for more than 60 years, Jeanneau’s mission is to allow everyone to discover the pleasures of the sea, to witness unique moments of happiness in complete serenity, and to share pure experiences on the water.

The world of sailing is an integral part of Jeanneau’s DNA, which benefits from a strong heritage and recognized expertise in the field of racing.

Jeanneau has participated in the greatest ocean races and the spirit of competition has always been a driving force in the evolution of the company. Being a pioneer, Jeanneau has relied on innovation and technology to stay ahead.

In 1982, Jeanneau becomes the exclusive supplier of the Tour de France à la Voile with the “Rush”, followed by the “Selection” and finally the “Jeanneau One Design” from 1992 to Jeanneau has also been part of Philippe Poupon’s impressive track-record, aboard the “Fleury Michon” catamarans including victory in the 1986 edition of the Route du Rhum.

In 1990, the first three places in the Route du Rhum were won by trimarans manufactured by Jeanneau Techniques Avancées (Pierre 1er by Florence Artaud, Fleury Michon 9 by Philippe Poupon, and RMO by Laurent Bourgnon).

With the Sun Fast range and the new Sun Fast 30 One Design, Jeanneau confirms its passion for human and technical adventures by offering accessible racing boats.